I woke up this morning eager for action. Sadly I’d docked up in deepest, darkest Derelik last night so action was the last thing on the mind of most of the local denizens. Down here the pace of life is pretty slow, but I find myself drawn to it time and time again because of its quirky positioning and easy access to lowsec.

I pulled the dust cover off The Vital Spark and commenced my usual checks. I was going out PVP rigged again today having whetted my appetite on the Prospect last night. Everything was in place but a few drones needed some attention. I’ve not yet mastered ECM drones so they were unceremoniously pulled from the ship, having been left in there by my main when it was donated. Up until recently I’ve been covert ops capable only and have only just finished mastering most of my drone and armor skills.

The thought of catching a sleepy explorer with a cargohold full of booty once again drew me to undock and warp over to where I’d started yesterday’s adventures, Hasiari. Just the one signal in system today, a Z647 wandering C1. In I went. J163743 was similar to Hasiari in terms of activity, as in there was none, so I set about scanning down all the sigs and zoomed over to the Raitaru on the outer planet to see if anyone was awake.

Scans revealed lots of gas, the highsec static and another wandering C1 connector, but I also spotted…

Now I’m nosey, hence my chosen profession and y’know there’s no way on this Earth that I’d leave those cans in space without checking them out. Sadly hangar containers aren’t scannable, so you need to physically get to them some how. I got them down to a five degree scan from the sun and worked out they were around 1.5AU away. I then spent probably 30 mins warping between the outer planet and the sun to get to within a reasonable range, and by lunchtime I’d narrowed them down to around 45,000km away. Not far, but far enough for them not to be visible on grid. Sadly they weren’t also directly in line between the two celestials, but off to the side at around a 30 degree angle from the sun. Additionally there were no celestials or anomalies to close them down from, so it was going to be a case of a long, slow burn.

The system had been relatively quiet. I’d seen a Venture, another Astero and a Stratios. None appeared to be lingering and without combat probes they weren’t going to bother me.

I returned to Sasta and picked up my Magnate, popped on a few overdrives and returned to the scene of the soon-to-be crime. In hindsight I should have spent an extra few minutes popping into Tanoo and getting a Slasher or an Executioner, but as I may have mentioned before I’m very lazy. I also use the word ‘soon’ loosely as at that point my partner popped her head around the office door and asked if I’d like to go out for lunch…

Someone had been busy whilst I was away… 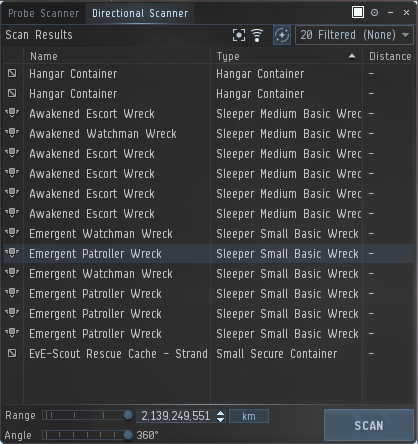 … but I started burning anyway, dropping alignment bookmarks as I went in case of a dc and of course dscanning constantly.

After what felt like a few hours (in my defence I was catching up on Stranger Things so time slipped by…) I noticed the cans pop up on my overview. I’d burned around 20,000km and the cans were 18,000km away when grid loaded.

“This better be worth it”, I though.

I bookmarked the cans and hightailed it back to Sasta to pick up the Astero. The hole looked stable and I returned in a few minutes, landing on the first can and suddenly wondering whether my presence in system for all that time uncloaked may have alerted the residents to what I was doing. There may be a trap here. Time to spring it. The PIRAT ticker on the can also enhanced my curiosity! I cracked the first one and my heart sank. A Tayra.

It died. I was slightly miffed. Stuff you, Dora-The Explora

Onto the next can, which at first glance was almost as disappointing. Sat there all on its lonesome was a Worm and to be honest, I almost killed it. Then I remembered that they’re worth around 50m so I decided to exit the hole and pod it back to pick it up.

Boy am I glad I did.

The fitting states the value as 680m and I’m under no illusion that it’s not worth anywhere near that, however I am very very happy indeed. So, thank you Tenebris Meam, formerly of Dark Venture Corporation who previously inhabited this hole, for leaving this little gem behind.

You also owe me a beer for not screwing up your shiny PIRAT killboard as you’re now a member!

I’m all burned out now, I’ll be back in the week with more mediocrity.

Today’s exploration music has been…

A woman on the edge of something... View all posts by Fayte